Information Literacy 101 - The Basics of Using the Salmon Library

A difficult but essential skill in college writing is using other people's ideas and texts appropriately. All knowledge builds on the contributions of others. In our college courses, we are continually engaged with other people's idea: we read them in texts, hear them in lecture, discuss them in class, and incorporate them into our own writing. It is important in our writing both to show our dependence on other people's work and to identify our own contribution. Plagiarism - failing to acknowledge our debts to others - is using others' ideas and words without clearly acknowledging the source of that information, which muddles a clear identification of original work, as well.

Give credit whenever you use

Common types of plagiarism include 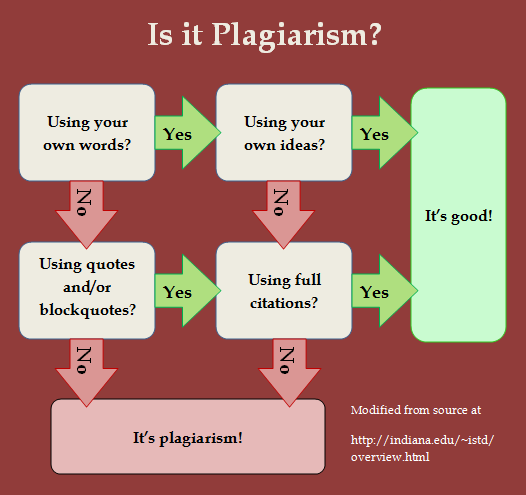 Examples of Plagiarism & Appropriate Use

Take this snippet of made up text from author I. M. Fictitious (let's say page 17 of the Worpit Encyclopedia):

The largest known type of worpit is the Blue Worpit, having a six centimeter snout and a meter long tail. It is well known for its shrill call and bright fur. Unfortunately, the Blue Worpit has recently become endangered because of its diet on shallow stream minnows being threatened by rapid development of nearby cities. The estimated number of Blue Worpits in the wild is probably under 50,000 now, with that expected to decrease in the next decade.

Here's an UNACCEPTABLE paraphrase of this passage that is plagiarism:

The largest worpit is the Blue worpit, having a long snout and a meter long tail. It is most famously known for its shrill call and brightly colored fur. The Blue Worpit has become endangered recently because of its diet of shallow stream minnows, which is being threatened by rapid deforestation due to nearby cities. The approxiamate number of Blue Worpits is probably under 50,000 in the wild, and that is expected to decrease in the next decade.

The preceding passage is considered plagiarism because the writer

With its shrill cry and long tail, the relatively large - for a worpit - Blue Worpit is a sight and sound to be known. Sadly, due to rapid development of nearby cities, its diet of minnows from shallow streams is in jeapordy. While there are only tens of thousand left in the wild, even this small number may soon decrease. (Fictitious 17)

This is acceptable paraphrasing because the writer:

See Also: Indiana University at Bloomington has a compare and contrast guide called "Plagiarism: What It Is and How to Recognize and Avoid It" which is the original inspriation, via being spotted at Augusta State University's Sociology Department's page on plagiarism [no longer extant], for the above made up example. Thanks and credit goes to them. For those wanting more info, those above link should be helpful.

Turnitin.com is a service that UAH uses to help detect plagiarism in students' papers.  For more information on Turnitin, contact Mary McManus at 256-824-2520.